An Avengers birthday party should be all about saving the Earth and even the entire universe from the evil plans of various villains.  The invitation should feature a "CALL FOR HEROES" requesting birthday-goers to participate in the coolest form of service and fun both -- coming to the party dressed as one of the superheroes featured in the Avengers.  If you don't wish for a costume party, even an invitation to come in masks or provide Avengers masks during the party is still a great birthday idea.

Since saving the Earth is a matter of such importance to the Avengers, you can even place your own "heroic" twist in the noble attempt to save the planet -- how about environmentally-friendly invitations that exhorts birthday participants to come and help fight environmental degradation, the Avengers-style?

The Avengers birthday party theme isn't complete without those really cool decorations that screams Avengers from top to bottom.  Place a welcome streamer, banner or tarpaulin of the iconic superheroes at the birthday venue's very entrance, and that in itself sets the atmosphere for Avengers fun!

Place a little action on the birthday cake, putting Avengers cake toppers at the very top.  Avengers table covers put the fun in eating, and certainly takes off from the run-of-the-mill party table decorations.  And we all know kids really perk up at the sight of tons of balloons strewn here and there all over the birthday party venue, so hordes of Avengers balloons and decorations will really be a Marvel (pun intended) to these children.

The "Avengers Assemble" sound track is one cool collection of good music certainly appropriate for any action-filled Avengers birthday party.  Grunge icon Soundgarden's "Live to Rise" opens the Avengers Assemble collection which features original songs from a diverse range of artists including Rise Against, Shinedown, Bush and Redlight King. 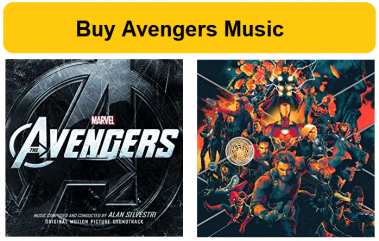 Avengers Bowling is similar to the traditional bowling game.  What's needed are several empty plastic bottles (soda bottles preferably) and several small balls like tennis balls.  Group the children into several teams -- Team Hulk, Team Iron Man, Team Thor, etc.  You can group the girls into Team Black Widow or Team Scarlet Witch.  Cover all the plastic bottles with stickers or glued-on pictures of Loki or Thanos or any of the bad guys in the movies.

The object of the game is for each team to bowl away all the Thanos bottles as fast as possible.  Have each member of the team do his or her share by using one tennis ball each to bowl at the assembled Thanos bottles.  Adults keep tabs of the time from the time the first team member throws his or her ball, until all members have taken their turn at bowling or until all bottles are down.  The team that bowled away ALL bottles at the shortest possible time is the winner.  If the team runs out of members and there are still bottles standing, then the team with the most bottles downed is the winner.

Avengers Weapon Hunt takes the birthday-goers into an exciting quest for the weapons used by the Avengers superheroes.  Thor has his might hammer, the Iron Man has his mask, Captain America has his shield, the Black Widow has her gauntlets, and the Hulk has his... purple pants!

You can prepare the cutouts of these weapons early on.  Just download images of these items using Google search, or click on the link here to get all weapons at once.  Then hide these weapons at strategic sites in the birthday venue in advance.  You need to create a map for each weapon that was hidden, like your typical treasure hunt.

At the birthday party itself, group the children into several teams that will hunt for each of the hidden weapons. The first team that gets to their assigned weapon saves the world and wins the game! 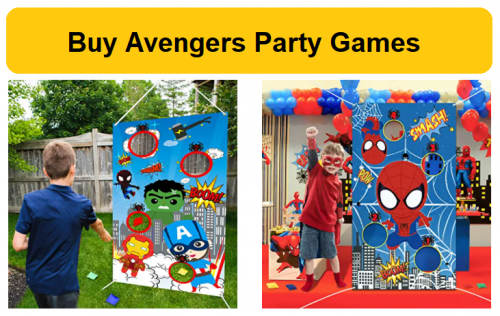 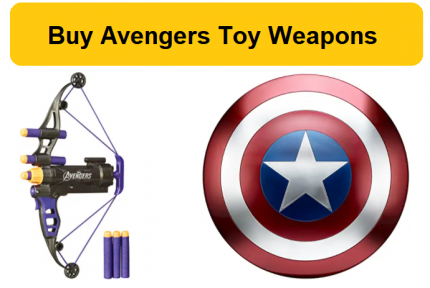 Aspiring to be in the shoes of their favorite Avengers superheroes not only make kids happy, it increases their self-confidence and opens up their imagination.

You can choose assorted unique designs for these party favors, because kids always enjoy selecting their favorite superhero characters from multiple choices. 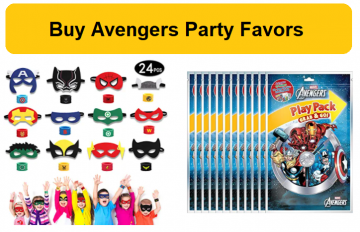 There are so many ideas to choose from when it comes to selecting the perfect birthday gift for an Avengers-loving birthday kid. It helps if you know the birthday kid very well and are familiar with his/her preferences.

Or you can just take an easy hunch thaty anything related to the Avengers franchise is well-loved by almost all kids of all ages.  Any merchandise in mind would surely delight the most picky child. 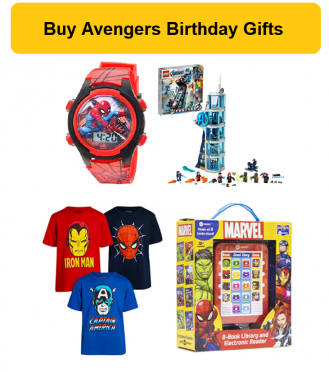 The Avengers movies began in 2012 with the orignal film that many consider not only as a good movie, but a GREAT one at that.  From being one of the well-loved comic book stories of many generations, straight to Hollywood as one of the best team superhero movie series ever made!  The Avengers is all that and more -- it is about team work and working together to achieve a goal.  And the Avengers can be a cool party theme  for a really fun birthday party!

What makes the Avengers pretty special as a birthday party theme is that it brings together several iconic superheroes together, namely, Iron Man, Captain America, Thor, Hulk, the Black Widow, Hawkeye, and many more.  In the movies they are an awesome bunch of bantering colleagues that eat action for breakfast and fight villains to save the universe.  For birthday kids, moms and dads who have an absolute love for superhero comic books, the Avengers birthday party theme is IT!